Is My Son’s Constant Gaming a Parenting Fail?

Does it feel like you’re losing your son to video games? He’s spending increasingly more time in front of that screen. He’s less interested than ever in real-life situations. You’re convinced that it’s your fault. But is it? We explore this dilemma in this post.

Who’s to blame when a young man can no longer control his gaming? To better understand this question, we should start by considering our evolving understanding of gaming addiction and the bearing it has on your son’s mental health.

One of the most important developments in addiction treatment communities this year had to do with online gaming. The World Health Organization (WHO) officially added ‘gaming disorder’ to its International Classification of Diseases (ICD), which is essentially a handbook that outlines and describes various illnesses and health problems. Medical professionals around the world reference the ICD when diagnosing and treating health conditions.

The fact that gaming disorders have been added to this list isn’t a breakthrough in and of itself. Those of us on the front lines of addiction have long recognised the destructive power of video game addiction and online addiction. But formal recognition means more funding and research will follow – resulting in greater public awareness and more effective methods of treatment. That’s worth getting excited about.

More people than ever are aware of the dangers of gaming addiction. This includes parents – with many left wondering whether they’ve ultimately let down their kids by giving them access to video games in the first place. Are parents to blame when their kids develop a gaming addiction? 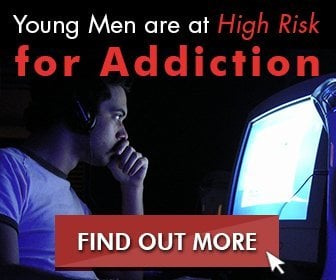 Parents Are Right to Worry About Their Son’s Constant Gaming

Before we start assigning blame, we should acknowledge that parents have every reason to worry when they see their son losing touch with real life. From an outside perspective, it’s clear that he’s descending into a kind of virtual darkness. But in cases like this, it’s predictably difficult for the addict to recognise what’s happening to them. They live in denial until they’re so deep into the clutches of addiction that even they can’t deny what’s happening to them.

These are some of the specific issues parents worry about:

My son’s constant gaming is making him miss out on real-world friendships.

The time your son spends absorbed in a virtual gaming world appears to be antisocial, at least from an outside perspective. The reality is more complex. One of the most addictive types of games is the massively multiplayer online (MMO) game (think World of Warcraft, Guild Wars, The Elder Scrolls). These games have strong social components – just not of the in-person variety.

In fact, the social component of these games is believed to make them even more addictive. When your son insists that he’s not being anti-social – that the friends he plays with online are real friends – he’s not misleading you. Just understand that this social dynamic is likely to deepen his addiction over time.

My son’s constant gaming is a waste of his potential.

Parents often feel that there’s a better way for their son to use his time than to sit alone in front of a screen for hours on end. What’s hard for them to understand is the sense of accomplishment he derives from completing goals within the game. In fact, the game is specifically designed to trigger this response. At this point, the gaming is already tapping into his reward system, which means you’re going to have a much more difficult time getting him to think objectively about the problem.

My son’s constant gaming is interrupting his studies.

One of the biggest parental concerns is that playing video games gets in the way of their son’s studies. While it’s tempting to draw a hard line and claim that any amount of gaming is going to disrupt your son’s studies, the reality is that there isn’t much research to corroborate this. Some students enjoy playing video games without taking it to compulsive levels. They’re able to maintain their grades.

What the research does show us is that addictive tendencies in students consistently correlate to negative academic performance. In other words, a fondness for video games doesn’t mean your son’s grades have to suffer, but an addictive relationship with gaming almost certainly does.

Who’s to blame for my son’s constant gaming?

When you see your son losing his way, your first instinct is, of course, to try and help him. But parents also want to know why this is happening – or even who they can blame. This impulse is normal, though it often takes a dark turn. It’s all too common for parents to conclude that they’re at fault. They resign themselves to the possibility that their parenting policies made this happen.

But this isn’t how video game addiction for young men works. As a parent, you don’t turn your son into an addict; the games do this themselves. It’s quite literally by design.

Video games are developed with the primary goal of hooking gamers. Decades of research and development has refined the way they’re designed. The fact that gaming platforms are able to tap into the brain’s reward system means companies can make their games as pleasurable (read: addictive) as possible.

The Reality Behind Your Son’s Gaming Addiction

Addiction hijacks the brain’s reward system, which is wired to promote our wellbeing. On a primal level, the reward system reinforces behaviours that help us survive, grow stronger and reproduce. But it’s also hackable. This is how addiction arises.

Playing video games stimulates the reward system. The pleasure your son takes from playing the games is real. And the desire he has to play longer and more often is a product of this. His brain’s reward system has convinced him that gaming is in his own best interest. It’s been hacked – and this is only going to lead to greater isolation, loneliness and dependence.

WHO added gaming disorder to their classification of diseases for a reason. And addiction always works like this.

If you’re out of ideas on how to help your son, then it’s time to get help. The Edge offers state-of-the-art addiction treatment specifically designed for young men. At our resort-like facility in Northern Thailand, we treat the whole person through a combination of cognitive behavioural therapy, group one-on-one counselling and physical activity. We can help your son separate himself from his addiction and discover new, more productive passions. Contact us today to learn more.